If you’re reading this edition of our HDCA newsletter, you’ve found yourself on the new HDCA website. On this site you’ll find links to our affiliated machanot and organizations, as well as information about those organizations. We hope you find this communication tool one more important step in our quest for closer communication and relationships.

Toda raba to Danny Fishman for his hard work and guidance to make this a reality.

PS  You can now subscribe to this newsletter at “HDCA Blog” in the menu above. Pass the word!

In March, we had our first in-person movement seminars in 2 years! We decided to combine Moetzet Madatz and Moetzet Mazkirut, which are the (usually separate) training seminars that the Mazkirut Artzit runs for the youth leadership of the machanot. Due to COVID guidelines, we unfortunately had to host the seminar in two separate locations. For the Canadian machanot, we had a three day seminar in Toronto, and for the American machanot, we had a three day seminar in Philadelphia. We had a total of 40 people at both seminars, and have since gathered all together on Zoom to give the leadership a chance to meet each other and share updates about summer preparations. The content of the seminar was generally well-received by the participants, and we had a lot of fun together in both locations. 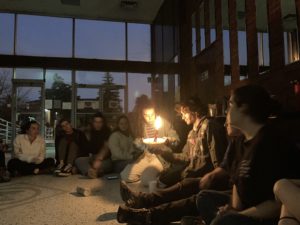 Here are some highlights of the seminar:

MBI just keeps growing and growing! Since the last HDCA Newsletter, MBI has grown from 60 participants to 77 participants, with more expected to register.  At of this date, we have gone through all the tickets that NFTY purchased on the group flights, so they are purchasing individual tickets for anyone who registers at this time with an added fee.  This fee goes up depending on the price of the seat on the plane, so if you or anyone you know is still thinking about registering  for MBI, do so now! 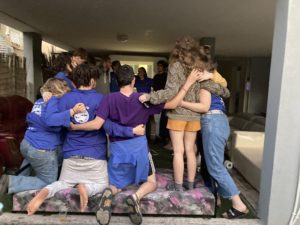 Workshop 71 is officially over. The chanichimot had their sikkum (wrap-up) seminar right as Pesach started, and even though many tears were shed, everyone is incredibly excited to come back to HDNA with all they learned on Workshop.

Workshop 72 registration is in full swing.We are currently at 4 applicants with about 10 more in the process of filling out their applications.

We are still very actively looking for new participants for Workshop 72, so if you know of anyone or wish to help with Workshop recruitment, please send the Rakazol Tochniot, Ben Markbreiter, information at programs@habonimdror.org

“It’s amazing that everywhere in the world kids are the same, they just want to play and laugh and run.” – Yelena Adelman, volunteer in Warsaw.
As most of us have watched in horror, the war in Ukraine has dragged on for over two months. Every day  its humanitarian toll increases: today over 13 million refugees have fled Ukraine, leaving behind other civilians in drastic conditions. For me, it has been a small comfort to know that our partners across the world in Israel are supporting the refugees in many different ways. Please read on to find out what our partners, and specifically some of our HDNA bogrimot, have been up to.
Dror Israel and Hanoar Haoved 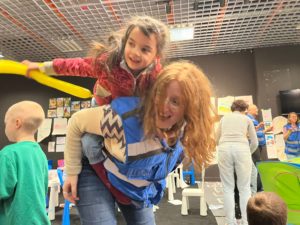 Our sister movement has organized day-camps in absorption centers in Israel for the new refugees, as well as providing bureaucratic support and running donation drives for necessary items. As the Ukranians have transitioned into more permanent locations, some of the children have maintained connections to the madrichim that they met, and joined kenim of Hanoar Haoved or ulpanim run by Dror Israel.

Dror Israel has also sent delegations of volunteers to Moldova, Romania and Warsaw to work with the refugees. In Warsaw, they are operating a daycare center at one of the biggest refugee centers, where thousands of people pass every day. The fifth delegation of volunteers is leaving soon, with two more planned to follow. You can find more information about their work here:
https://www.drorisrael.org/campdrorukraine
Phia Blumenthal (Workshop 58, Tavor), Yelena Adelman (Workshop 54, Tavor), Joanna Zeiger Guerra (Workshop 57, Galil) and Leah Silverberg (Workshop 56, Gesher) have participated on these delegations.
Habonim Dror Around the World 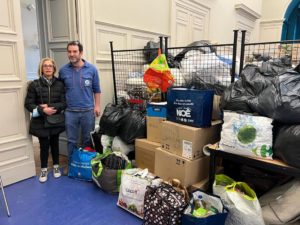 HD France and Belgium have mounted very successful drives for clothing and supplies, which have been driven to the border areas the refugees are passing through.

Workshop 71
While in Poland for their Holocaust Learning Trip, the Workshoppers visited a yeshiva that was being used as a temporary housing site for refugees in Eastern Poland, and visited Phia and Yelena in Warsaw to learn about the daycare service they were offering. While in Lublin, they helped prepare care packages. 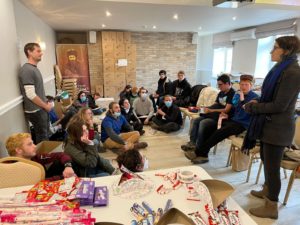 Habonim Dror Olami and the Kibbutz Movement have sent delegations of volunteers to Poland and Romania to assist in areas where refugees are congregating. These include madrichim to work with children, and medical and mental health support workers.
The Kibbutz Movement has also collected clothing, gathered donations, and raised money. They are facilitating the absorption of immigrants into individual kibbutzim.
May we soon all know more peaceful days.

Camp Moshava has new board leadership. After several years of service, Pam Stone has passed the presidency on to Avi Edelman.  Thank you Pam for your hard work and dedication to Mosh! 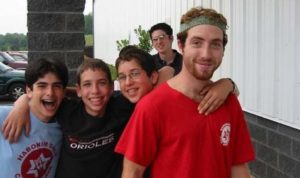 Avi may be the youngest of our six HD Camp Board leaders – he’s turning 33 as we write these words.  He began as a chanichol at Mosh in 2001, continuing through the years as a camper and then participating in MBI,  madatz, and tzevet, ultimately serving as Rosh Mosh in 2011 and 2012.

After “aging out” of the movement, Avi wanted to stay connected.  He immediately joined the Mosh board and has remained a member (with a break for term limits) ever since, heading up fundraising efforts among other things.  He has enjoyed working as a lay leader because he sees such work as another expression of Habonim Dror values, which are reflected not only in our youth programming but also in the way we maintain our organization and help it grow. 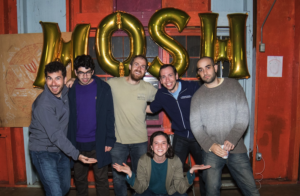 Avi (2nd from right) with past Mosh Roshim

Avi graduated from Columbia University with a degree in Film Studies and is about to receive his Master’s Degree in Non-Profit Management, also from Columbia.  He lives in Brooklyn Heights, New York and is able to maintain his Mosh leadership position thanks to Zoom!  He currently works at Columbia as Associate Director of Multicultural Affairs and Diversity Education, focusing on several intergroup dialogue and facilitation initiatives and advising identity and culture-based student groups.  At Columbia, Avi founded a program called Sankofa Tzedek, which brings together a cohort of students on campus for a year of personal identity development, intergroup dialogue, intercultural learning, transformational travel and social justice education that centers the experiences and histories of Black and Jewish communities.. “Sankofa” is a symbol from the Akan tribe in Ghana, often depicted as a bird that is looking backwards over its shoulder, suggesting that as a people moves forward, the knowledge of the past must never be forgotten.

Avi says that Mosh played a truly formative role in shaping not only his values, but also the way he approaches his work.  “When I’m running a dialogue group with Columbia students, it’s just like shaping a pe’ula,” he says.  Congratulations on your new role, Avi!

Machaneh Tavor has undergone a major leadership change as Danya Shapiro has replaced Amit Weitzer as Executive Director.  Amit served for almost six years in this important position and is now working as the Detroit-area Director of Hazon, an organization committed to weaving sustainability into the fabric of Jewish life.  Best wishes to Amit as she embarks on this new journey! 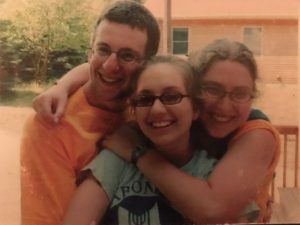 The Tavor Executive Director baton has been passed to Danya Shapiro, a lifelong Tavornik and Jewish educator. Danya grew up in Chicago and came to Tavor on her own initiative at age 11. She had no family connection or friends in Habonim, but after reading a brochure and attending a parlor meeting, found herself intrigued by the kibbutz element and signed up.

Years later, she’s still here!  Danya attended MBI and Workshop 47. She worked as a madrichol at Tavor and Mosh, later serving as Rosh Tavor.  She eventually joined the national mazkirut as Gizbarit (Treasurer).

Danya made aliyah with a Habonim garin and worked in various HD tafkidim in Israel, including as Workshop Madrichol.  It was there that she met her now-husband, a Galilnik named Matt Becker – also a Workshop Madrichol. They are now the parents of Ruth, age 11, and Ziv, age 8 (Tavorniks, too!)

Danya and Matt returned to the U.S. where they continued their HD activity as staff at Galil.  Later moving to Cleveland, Ohio, Danya re-engaged with Tavor, joining their board of directors 4 years ago.

Danya has a degree in Early Childhood Education and has worked in Jewish community settings including pre-schools and kindergartens. Most recently she served as Family Program Manager for jHUB at the Jewish Education Center of Cleveland, whose mission is to offer interfaith families ways to comfortably explore, discover and personalize Jewish culture and values. Danya is also an artist specializing in fabric arts and has made custom wedding chuppahs for many Habo alums.

Danya was motivated to take on the job of Tavor E.D. because she recognized the huge impact Habonim Dror has had on her life’s course and on who she has become as a person.  She sees this tafkid as an opportunity to give back – and pay it forward.  She looks forward to working with all elements of the Tavor community, elevating the voices of donors, alumni, parents and youth leaders at this important time.  May you go from strength to strength, Danya!

This Yom Ha’azmaut, Ameinu and Habonim Dror invite you to join us in a celebration of Israeli music and culture!

The event will be hosted by Robbie Gringrass, an Israeli performer and educator. 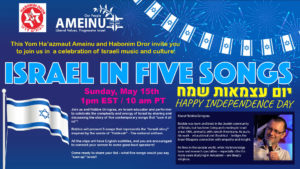 Robbie will present, play and discuss 5 songs that represent the “Israeli story” inspired by the words of “Hatikvah” – “To Be a People Free in Our Land” ; One song addresses security (To Be), one relates to Jewishness (People), the third addresses Freedoms and the fourth talks about the Land. The last song will be for good luck!

All the clips will have English subtitles, and you are encouraged to connect your screen to some good loud speakers!

The event is free but rsvp is needed in this link:

Robbie was born and bred in the Jewish community of Britain, but has been living and creating in Israel since 1996, primarily with Jewish Americans. As such his work – educational and theatrical – bridges the Israel-Diaspora connection with empathy and insight.

He lives in the secular world, while his knowledge base and research specialties – especially after his many years studying in Jerusalem – are deeply religious.